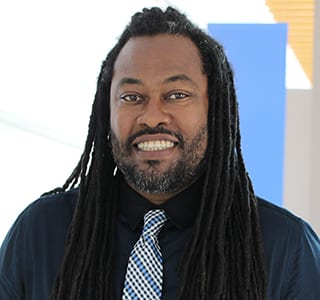 Second Century Initiative (2CI) Fellow Thaddeus Johnson is exploring police behavior and how it is connected to the education level of police officers.

“I had already heard great things about Georgia State but I really started looking more closely at the university after I learned one of my mentors had graduated from the same program,” Johnson said. “So that in combination with the great faculty at Georgia State played a huge role in me deciding to pursue my Ph.D. here.”

Johnson is currently researching police professionalism, specifically the education of police officers and how it impacts different outcomes. His dissertation looks at how police professionalism impacts clearance rates and homicide rates. He said working as a police officer in the past, along with the research conducted with his mentors, is what led to his interest in this topic.

“I am a former officer of ten years. I was a ranking officer when I decided to stop and my research was always a question that I found interesting while I was working in the field,” said Johnson. “The education of officers has always been an issue in policing. Should we hire more educated officers? Should a college degree be required to become a police officer. So, I’m trying to answer those kinds of questions with my research.”

So far, he has completed a few of studies on police traffic stops and violent encounters in relation to the educational level of officers. Johnson said that he and his advisors have found officers with higher levels of education to be more ambitious and policy compliant than officers with less education. Taken together, their studies show that officers with higher levels of education are less likely to use force when it comes to police shootings, but more likely to make traffic stops and conduct consent searches.

Johnson recently placed 3rd in Georgia State’s Three Minute Thesis Competition (3MT). The competition, founded by the University of Queensland, is a research communication competition where students present their research in three minutes. Johnson’s presentation centered around his “School-to-Prison-Pipeline” research in which he attempts to find disparities in Black youth being expelled or suspended from school and whether these expulsions and suspensions later lead to offending among Black juveniles.

After receiving his Ph.D., Johnson plans on starting a career in academia and mentoring students.

“My ultimate goal is to work and consult with police departments but really be based from an academic or criminal justice or public policy department,” he said. “I want to continue this line of research to maintain the overall goal of making sure the credentials and qualities of the officers match the overall reward system and structure that they have in policing.”

For students interested in pursuing a Ph.D. program at Georgia State, Johnson has this advice: Be prepared to work.

“Have an idea of what you want to do but be flexible and be ready to roll your sleeves up and work but it’s worth it. This has probably been the most challenging thing I’ve done but it has also been the most rewarding,” he said. “You don’t do scholarly work. You become a scholar and that’s what I’ve learned and that’s probably the biggest advice I have. Don’t make this something you do. Become it.”