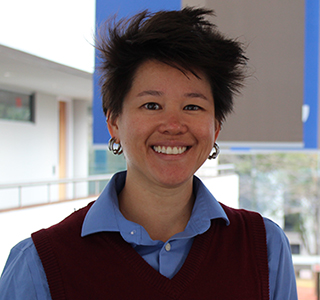 Second Century Initiative (2CI) Fellow Sarah Ku is working to find a solution to something that’s puzzling local governments in the U.S. and the West: managing large amounts of waste that other countries aren’t accepting for recycling.

Ku is currently a doctoral student in the international business program at Georgia State University. Originally from Atlanta, she attended the University of West Georgia where she received her bachelor’s degree in marketing with a minor in art. Although she loved art, Ku said she chose to pursue art as a minor because of the career limitations that artists face.

“My mother is an artist and while she’s always been able to support herself, she was very candid with me on the limitations of an artist’s life. So, I chose it as a minor to be able to continue improving my skills without making it a career choice,” Ku said. “Art is still definitely a hobby, but unfortunately I don’t have much time to be able to do it as much as I’d like these days. However, I still love to draw and sometimes do it as a break from studying.”

Ku is interested in researching waste management in China. From a business standpoint, she wants to discover ways to aid China in controlling waste after consumption and then design and develop marketing strategies to market those ideas for implementation in American markets.

“In business, there’s a lot of priority on how to increase consumption and I’m looking at what happens to all the waste after consumption,” Ku said. “My research comes at a timely point because with China no longer accepting waste or recyclables from other countries, it’s becoming more of a relevant and urgent issue.”

To aid with waste management across the world, Ku is looking into the marketability of using insects to mitigate waste. Ku said insects can be an effective source for waste consumption and have been applied in different industries around the world.

“Bugs are very applicable in other countries in the world in terms of human consumption, animal feed, and waste management,” Ku said. “China is using bugs a lot in various aspects so that’s exciting for me because it’s not only a market that is already utilizing bugs, it’s also a market that produces and deals with a lot of waste.”

One challenge is that the use of insects isn’t very appealing in the U.S. or Western markets. To solve this problem, she relies on the guidance of Georgia State Fuller E. Callaway Professorial Chair and Professor, Dr. S. Tamer Cavusgil, to assist her in her dissertation research.

Ku said her interest in traveling the world and different cultures led to her pursuit of a Ph.D. in international business.

She said technological advancements have significantly contributed to the rise of international business, so much so that it would be extremely difficult to have a strictly domestic business outlook now. A major goal for Ku is to educate Americans in business about things that other countries are doing.

“I think that a lot of countries are doing exciting things in business and the American mindset can often be arrogant and incorrect,” she said. “I think it’s important to gain perspective and see what other countries are doing and work together in terms of figuring things out rather than thinking one country has it all figured out.”

Ku spent a decade in the industry co-founding a medical device company to commercialize technology invented through Georgia Tech Research Corporation and the Centers for Disease Control and Prevention (CDC). The product, called PneumoniaCheck, is a tool that can aid in the diagnosis of pneumonia, tuberculosis, or other lung infections. After closing the company, Ku decided to pursue the doctoral program at Georgia State.

Ku chose Georgia State for her Ph.D. program because of the university’s reputation and the existence of its international business program.