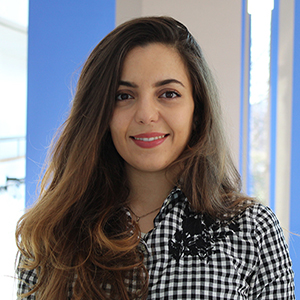 Second Century Initiative (2CI) Fellow Soukaina Filali Boubrahimi is the outstanding research award recipient of 2019 from the computer science department at Georgia State. Filali is involved in interdisciplinary research and uses computer science and data mining to assist other disciplines of science at Georgia State. She does it under the supervision of Dr. Rafal Angryk.

Filali, from Rabat, Morocco, began her college career at Al Akhawayn University in Ifrane (AUI) where she received her bachelor’s degree in computer science with a minor in business administration. She followed up her bachelor’s degree with a master’s degree in software engineering. She chose Georgia State to pursue her doctoral studies (Ph.D.) because of her interest in Georgia State and in particular, the university’s data mining lab.

“What interested me the most about the Data Mining Lab at Georgia State was the fact that it was an interdisciplinary lab that designs and uses tailored data mining algorithms for serving other science disciplines,” she said. “I knew that Georgia State was one of the leading research universities and that attracted me as well, but the Data Mining Lab is what really caught my attention and is among the main reasons I decided to attend the university.”

Filali is conducting her research in the field of data mining, also known as knowledge discovery from big data. This is the process of finding patterns and transforming data into information useful for human beings.

Her research involves time-series data mining. She specializes in classification using neural networks enssembling, a data mining task that involves predicting categorical class labels based on empirical data. Classification process could be simply explained using a popular duck quotation: “If it looks like a duck, swims like a duck, and quacks like a duck, then it probably is a duck.” Fillali is searching for patterns in data that help her assign the recently-observed behaviors to labels that are known to data users/decision makers, making the big data more understandable for human beings.

“In the last decade, many machine learning models have been produced to solve prediction problems; however, most of them come with their own theoretical assumptions. For example, a Naïve Bayes classifier assumes that there are no strong correlations between the input features.  Usually what a researcher does is pick the models whose implementation is already available or the ones that they are most familiar with,” she said. “I believe that in order to fully leverage the power of every single model, we need to combine them in a meaningful way using some machine learning technique to optimize the models, or to maximize their accuracy, or to improve the robustness of the resultant predictive model.”

Filali’s predictive data science research can be applied across many different fields. For example, during her summer internship she applied her research to financial fraud detection to foresee if the historical transactions on a customer’s credit card suggest a fraudulent pattern or not. For her Ph.D. studies, she is working in collaboration with solar physicists at Georgia State on the far more challenging problem of solar weather predictions.

Severe space weather storms can disrupt electronics that modern society is reliant upon, from GPS satellites to circuitry on Earth, depending on the intensity of the disruption. It also represents a cancer health threat to astronauts as a result of solar radiation storms. “The models that we are producing will also be helpful for solar data mining where we are using them to learn solar event precursors and predict when solar storms may occur,” she said. “These solar storms can cause excess currents in power grids and oil pipelines, the consequences of which may lead to huge economic losses and affect our everyday lives as well. For example, in 1989 the entire province of Quebec, Canada suffered an electrical power blackout due to a solar storm where millions of people suddenly found themselves in the dark while conducting their everyday activities.”

Filali credits her love for computer science to an early childhood memory. “My oldest computer related memory was when I was a child when I had my first computer at home. I was playing with games on my computer and I was so fascinated by the visual experience of those games,” she said. “I also had a cousin who was a computer engineer who usually came and fixed our computer at home. He used to open the whole computer and handle the hardware of the central unit and I was very much interested in what he was doing. So, I became more and more attracted to the domain because of that initial experience in my childhood.”

After she earns her Ph.D., Filali said she would like to join academia and become a professor.

“I’m really passionate about research and teaching, and my philosophy is that teaching computer science should deviate from traditional textbook problems and be a more goal-focused process. Ultimately, the goal of most undergraduate students is to make use of the theory learned in class and transform their acquired knowledge into support for their loved ones. Today, the interview process with big and middle-tier tech companies is no longer a secret, and by making education more goal-focused we can prepare better for the highly sought-after jobs. I am currently teaching data structures and I believe that using interview questions in the classroom, coupled with on board coding practice as a simulation of a real onsite interview setting, is a big incentive for my own students. This experience will help them to pursue a career in IT.”