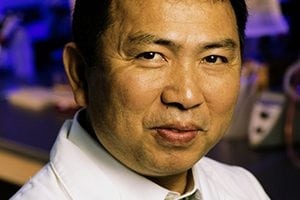 Dr. Ming-Hui Zou, director of the Center for Molecular and Translational Medicine at Georgia State University, has received a four-year, $2.4 million federal grant to study cardiovascular complications in diabetes.

The grant from the National Heart, Lung and Blood Institute of the National Institutes of Health allows Zou to continue his research, which has been funded since 2004.

Dr. Zou is a strategic hire under the Second Century Initiative and the Next Generation Program.

The study will investigate how high glucose promotes dysfunction of mitochondria, the cell structures that produce the energy cells need to survive. It will also explore how mitochondrial fission, or division into two or more independent structures, results in atherosclerosis, the buildup of fats, cholesterol and other substances in and on the artery walls, and dysfunction of endothelial cells, which line the interior surface of blood vessels and lymphatic vessels.

“There’s a single layer of cells in the vasculature, which is called endothelial cells. These cells are very important,” Zou said. “They separate the circulating blood and the organs, so they protect the organs from damage. It’s like a barrier to prevent the blood going into the tissue. We study how this type of cells would become dysfunctional or damaged.

“We are also looking at how the defense of this cell type could prevent the damage caused by diabetes or hyperglycemia, high blood sugar concentration. We found the cells have a mechanism called autophagy, or self-eating, in which they digest themselves under stress conditions. It’s like an internal self-defense mechanism. We’re studying how this mechanism becomes dysfunctional and how we can enhance this part of the function to protect these cells and result in increased resistance to disease conditions.”